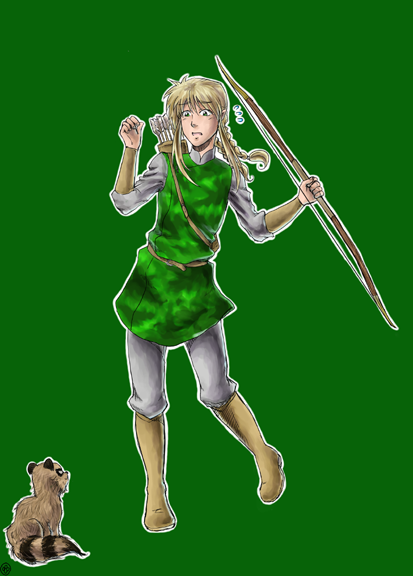 Age: 72 (Elfs age slowly, he’s just out of he’s teens by their standards) Species: Elf (as opposed to Elv) Blood type: A Special Notes/Powers: As an Elf, Elator is privy to all the standard Elfin powers. He ages significantly slower than other humanoids, and he’s slightly more sensitive to the comings and goings of the various magics of the world. Elly is also unnaturally attractive to raccoons, or at least, a particular raccoon.

Profile: All evidence points to Elator being an Elf. He possesses the same nimbleness and grace as the rest of his kind; though he tends to use his talents to avoid grievous bodily harm, usually from some horrible catastrophe he accidentally caused. He also has the unearthly beauty that make the Elfs famous. In fact, even for an Elf Elator is beautiful…very, very beautiful, perhaps a bit too beautiful. More often than not his looks attract unwanted attention and suitors. The whole ordeal has left him more than a little disturbed. Elator is skittish, squeamish, and easily shocked. This mind set does leave him oddly capable when working under pressure, mostly because of the constant state of blind panic he’s under. He also disavows all knowledge of that infernal raccoon.