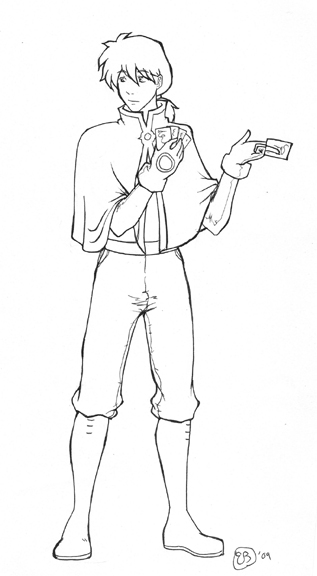 Special Notes/Powers: Second place…in everything. Leeroy gains expertise in most subjects and skills very quickly, but never really masters any of them. (Better known as a Jack-of-all-Trades).

Profile: A childhood friend of Sal, Leeroy learned the same random battery of subjects as the priestess. However, Sal (after becoming Phred’s chosen) moved onto a more intellectual track, while Leeroy moved to a more physical based education. True to form Leeroy graduated second in his class, became second in command of security at the Temple of Randomness and generally stayed right behind slightly more important people. Though he doesn’t know it, Leeroy was actually second choice to becoming Phred’s chosen (Phred flipped a coin to decide). When the rest of the Dubious Company crew landed in Sal’s life, Leeroy found himself following her and acting as her bodyguard through a series of events he’s not entirely sure about himself. Since joining the crew Leeroys found himself acting as a back up in most situations. He fights well, but not as well as Tiren. He’s smart, but not quite as smart as Walter or Sal, and whatever it is Elator does, Leeroy can probably also do, just not as well. Mostly though, he just wishes he was special. NOTE: Picture and thumbnail are older designs. We will update them as Tria finishes the art.