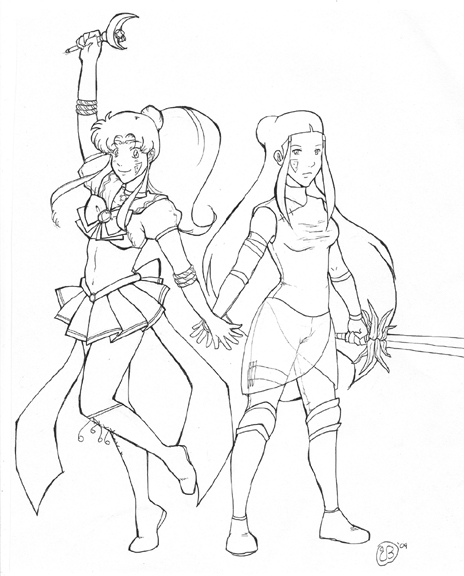 Special Notes/Powers: Too many to properly list. True to their namesake Mary and Sue are capable of nearly anything, though their powers are plot dependent. They do consistently have a telepathic link with each other.

Profile: The lives of Mary and Sue Spirkoy have been wrought with strife, and danger, and hardship. The kind of lives that build character…stupid, stupid character. It all started at a tender young age, when the mansion their parents owned burned down, leaving only the girls as survivors. A kindly uncle took them in, but sadly, this moment of happiness was not meant to be as his bakery burned down, immediately followed by an incident involving their grandmother and some fireworks. At that point the then Captain Izor found the young girls begging in the streets and took pity on them. From there the twins began their training in the Kreedor Special Forces. It quickly became apparent that they had much more natural talent than the rest of the army, and Izor made it a point to make the girls his private minions. Sue is slightly more serious and calm minded, as well as excelling at physical matters. Mary is friendly and happier and specializes in magic based talents. They also have the unique ability of making the author write like a complete tool. Seriously, this whole background reads like a really bad D&D character.

NOTE: Thumbnail and art are placeholders. New and finished art will be posted as soon as we have time to finish it.